Welcome! My name is Veronica.

I help young people become fearless and confident by helping them go within and connect with their true selves. I do this through group workshops, and select private coaching engagements.

YOU'RE IN THE RIGHT PLACE IF YOU...

Experience anxiety and concern about your child’s future.

Are concerned about your child’s social life.

Are afraid that your child doesn't fit in or have enough friends.

Don't know how to answer some of your child's big questions.

Why I Do What I Do

I first started working with children at the age of 16. When I founded a Kids entertainment company in Buenos Aires, Argentina. Since that first business venture, my work has expanded, deepened, and spiraled in several key directions—all of which reflect my passion for exploring how people can use their own inherit essence & abilities to enjoy a more fulfilled and happy life. I is driven by the conviction that each one of us has the potential for greatness and unlimited abilities.

As a teacher and lecturer I have been invited to speak at various venues in the Tri-state area. I am a faculty member of the Edgar Cayce Center, the Omega Institute for Holistic Studies in Rhinebeck, and Namaste Healing Center in New York City.

I started my career as a teacher in Buenos Aires, Argentina in 1993 where I taught English as a second language. Later on I was offered a position to teach Spanish to Chinese children. I then created a book and workbook, which is still used today, to teach Argentinean Spanish.

I moved to the United States in 2000. Since then I've worked as a performer in Children’s theater, a teacher and a counselor.

It’s through my passion for helping people achieve their goals and experience true fulfillment that I designed a new Meditation class which objective is to help children find serenity and insight to their many life’s quandaries. I have been teaching self-reliance and self-knowledge to young audiences since 2011. My classes are very engaging and big eye openers.

I was a weekly columnist for “Buenos Dias Nueva York” in Telemundo. I wrote articles for Holistic Publications, such as Natural Awakenings, New Life and Wisdom magazine. And was featured in the New York Times, E entertainment, NBC, and Wisdom magazine.

I remember what it felt like being a child. The world was so new - and I remember wondering, "How is this whole 'life' thing supposed to work? Where do I belong? How do I fit in?"

I remember feeling like no one else saw the world the same way as I did. Even as a child, I was so grounded in the present moment and so connected to myself, I naturally knew better than to get swept away by thoughts and worries.

I realized that this self-awareness is an innate skill all children possess.

As children grow older, they become skilled in assessing the world through human eyes and human brains. The realm of inner being (our Spirit) becomes obscured by the mind, causing us to "tune out" the wisdom that we already possess.

That’s why I decided to create a platform where young people could be heard and could be encourage to nurture their relationship with spirit. This work is about giving children permission to use the part of themselves that doesn't get nurtured at school or at home - which is also the only part that can give them true freedom and happiness in life. 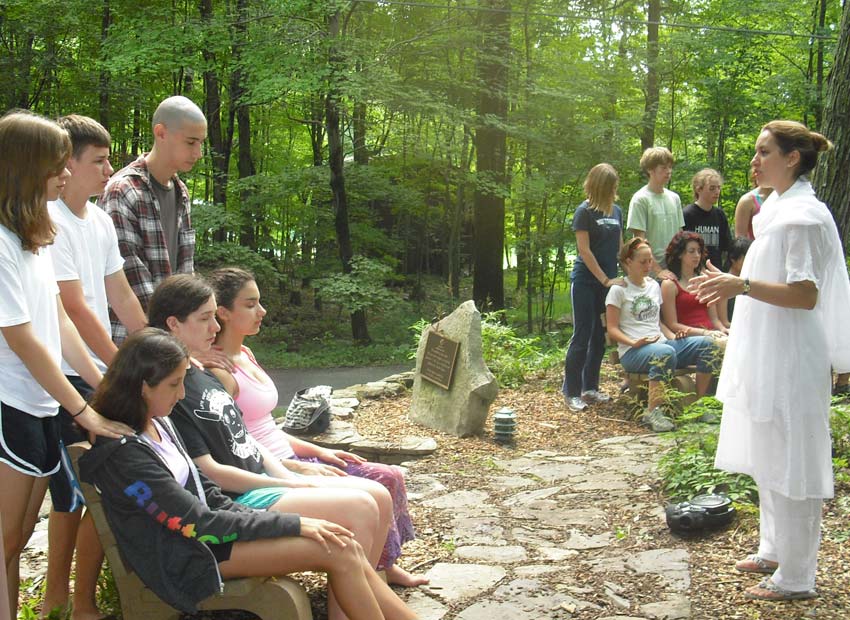 I spent the last 15 years working with adults in a similar capacity. I saw firsthand how lost and disconnected so many people were - and how it could have been avoided had they learned, from a young age, to shift their attention and focus.

By the time you're an adult though, it's so much harder to make a change. You're too attached to your sense of self, and you are bonded to your Ego (the way you present yourself to the world). Connecting with Spirit is a task most people shy away from after a certain age.

I started this business because it really pains me to see so many people living unhappy and unbalanced lives only because they have not been given this information before. Introducing mindfulness and encouraging a relationship with Spirit from an early age can improve the quality of your adult life.

My Message:
Love yourself. Honor who you are.
Trust and know that you are protected at all times.
You are meant to be happy always.

If you'd like to learn more about my work, please visit my services page.